The event started off as the Southend Vintage Bus Rally in 1974 it was held at Southchurch Park East off Lifstan Way.  The event saw a cavalcade of vintage busses actually go on a rally around the town.  The designated route saw the busses leave the show ground and travel up Lifstan Way—Southchurch Road—London Road—Chalkwell Avenue—First Avenue—Station Road—Cifftown Road—Nelson Street—Alexandra Street—Southend High Street—Pier Hill—Sea Front—Thorpe Bay Avenue—Woodgrange Drive—Liftsan Way.  Most of the busses attending took part in the road rally which took approximately 45minutes.

The rally saw the busses competing for a number of awards.

Travelling the furthest distance under its own power 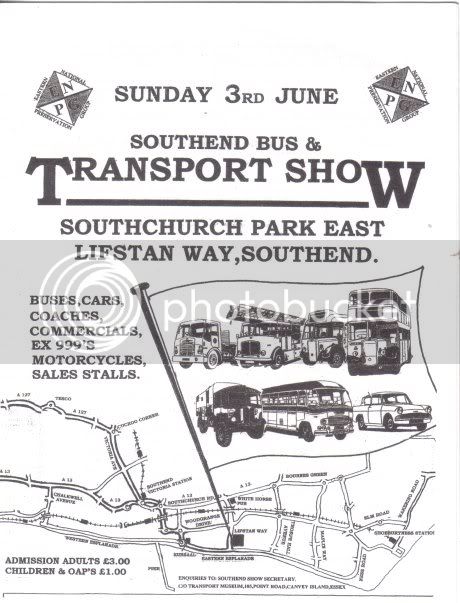 The event proved hugely popular for many years with the rally running for some 33years before falling numbers of vehicles and begun to affect the viability of the event, then a hammer blow struck when in 2008 the Eastern National Preservation Group who organised and ran the event collapsed with the demise of the organising group the event was scrapped.

If you can help with any further details please contact me here: