War on the High Street

Can you imagine how terrified you would be if you were walking along Southend High Street, heading to work or maybe embarking on some daily shopping, when you hear a very loud aircraft engine sound overhead.  On looking up you see a dark menacing aircraft at low level banking just above the town centre buildings. Today it might not be a concern with the air shows Southend regularly host; but this was October 1942 in the middle of World War 2.  Building entrances were sandbagged and windows taped up, and most people walked around with c 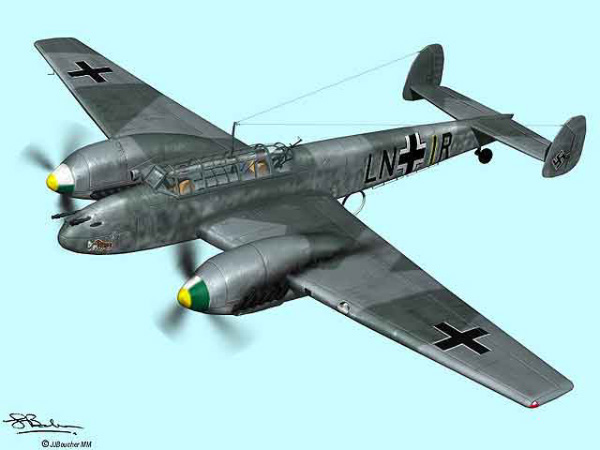 ardboard boxes dangling around their shoulders holding their gas mask.  Southend at this time had become a military town as it was ideally sited for the naval fleets in the estuary, that would protect the eastern coast, with this and its positioning on the Thames Estuary it also became easy pickings for enemy aircraft en-route to London or returning with some spare munitions on board.  The locals that remained in the town were used to the nightly air raid sirens warning of impending attack from the 'Luftwaffe'.  But this sunny morning was slightly out of the ordinary by the very fact it was daylight, and a brazen attack by a lone Messerschmitt, who seemed to have strayed from its squadron.

Trying to imagine this scenario now for those who never lived through the war, it must sound like a scene from some fictional novel or the latest blockbuster film from Elstree.  But this incident really did happen.  The Germans were only too aware of the important role Southend had acquired as a Naval Headquarters with the many commandeered seafront buildings such as the Grand Pier Hotel on top of Pier Hill.  The Pier itself became known as HMS Leigh; and one in 3 people seen walking the streets would invariably be wearing a military uniform of some kind.  The sensitive predicament of the town would see mass closure of schools and evacuation taking place, and again many of the schools would be acquired by the military for billeting.

No doubt the pilot of this Messerschmit might have thought he was achieving something special by catching the town unawares by bombing and strafing the High Street this sunny October day in 1942, obviously intent on causing as much death and distruction as he possibly could. Fortunately the High Street was unusually quiet, but the attack plane opened up still, with full cannon fire raking the High Street, also dropping bombs on shops and houses.  The death count, considering the huge amount of damage reached only four; three businessmen and a soldier.

Interestingly due to war time restrictions the local press could only relay the bare basics, so as not to give away strategic positions and to confuse the enemy as to what they may or may not have hit, so it was common for incidents to be merely reported as a 'Thames Estuary town', naturally locals viewing the images in newspapers would be able to pick the common sights of Southend.  This attack proved to be the most destructive and shocking of the war.

One of the key businesses that suffered considerable damage during this attack was the very prominent RA Jones, Jewellers, located on the High Street  Noted not only for its famous clock, which hung outside the shop, but also the owner, Robert Jones who was a serious benefactor of the town having the foresight to provide open spaces such as Priory Park to the town's people.  The shop suffered considerable damage. When the bomb hit it exploded with a fountain of rubble raining down on the nearby buildings and leaving a dust cloud that covered everything over a wide area.  Shops and buildings nearby also suffered structural and minor damage and workers were trapped inside behind walls of debris, awaiting rescue from soldiers, the fire service and medics.  War had obviously become an everyday event as the British spirit invariably kicked in and everyone helped each other get over the shock of the attack.  But any Southender living through this event would never forget the sound of a Messerschmitt engine at low level again.