Who Were The Haddocks?

Exactly when the Haddock family settled in Leigh is not known.  In the old register of Bishop Baudoke, of the fourteenth century, mention is made of John Haddock owning twelve acres of land in the manor of Leigh.  He died in 1327.  Perhaps he was not the first of the Haddock family to come to Essex, but he was undoubtedly not the last.  For the next 400 years they were to establish themselves as the greatest seafaring family in Britain.

Leigh church contains a fifteenth-century memorial which records the interment of Richard Haddock, his two wives Christian and Margaret, and John Haddock, the son of Richard and Christian, with Alice his wife.  There is an effigy of Richard Haddock and a woman believed to be his second wife, Margaret.  The memorial also refers to a group of ten sons and eleven daughters.  That fact that the effigies portray people of elegant costume and that the family were interred within the church shows that the Haddocks were, by the fifteenth century, people of high rank and station.

For the next two centuries the Haddock family must have been growing in importance, although there is no historical record of their activities.  It was in the seventeenth century that Richard Haddock began a career in the Navy that was to be followed by his descendants for a hundred years.  Richard Haddock became a captain and supported the Parliamentary cause.  In 1652 he was awarded £40 for his services.  His son William captained a ship called “The America” and sailed on the side of Parliament against the Royalists.  He was honoured by Cromwell with a gold medal, and in his later years he retired to his estate at Leigh.  He died in 1667 at the age of sixty-seven.

Many of the Haddocks were named Richard, as was the son of William, who was born in 1629.  Richard joined the Navy while he was very young and soon distinguished himself.  At twenty-eight he was in command of the frigate “Abragon,” which patrolled the Channel on the watch for Spanish marauders.  Among a collection of manuscripts in the British Museum are some letters written by Richard to his father.  These give an interesting insight into naval life in the seventeenth century, and show that Richard possessed a literary sense as well as a high standard of duty.  Later he served in the Dutch wars and for four years after the conclusion of one of these wars he left the Navy and traded in the Mediterranean.

In 1672 the third Dutch war broke out and Richard returned to the Navy to captain the “Royal James.”  During the battle of Solebay the “Royal James” caught fire.  Richard was wounded in the foot and saved his life at the last moment by leaping overboard.  When he returned King Charles took a silken cap from his own head and placed it upon the head of Richard.  Later, when peace came, Richard was made a Commissioner of the Navy and knighted.  In 1678 Sir Richard Haddock represented Aldborough in Parliament, and in 1685 he was for a short time the member for Shoreham.  He was joint commander of the Fleet in 1690 during the expedition to Ireland.  Copies of two letters from Samuel Pepys to Sir Richard are recorded in “The Life of Samuel Pepys,” by John Smith. 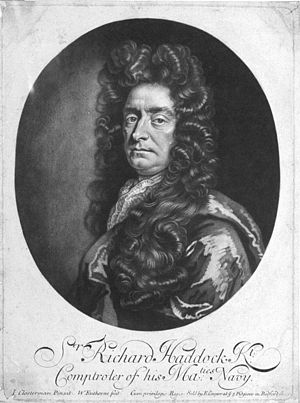 Sir Richard had three sons and three daughters as far as is known, although it is possible that his family was in fact larger.  His eldest son was Richard, who, also true to tradition, chose the Navy as his career.  In 1707, while convoying the merchant fleet.  Richard suffered a setback at the hands of the French and lost fifteen ships.  In spite of this he was given another ship to command during the following year.  However, he did little of note, and seems to have seen little active service after this time.  After a long life in the Navy he was appointed Comptroller in 1734, and held this position until his death in 1751.

The youngest son of Sir Richard was Nicholas.  He was born in 1686 and as soon as he was old enough he joined the Navy.  At the age of sixteen he was taking part in big naval battles and before seven years had passed he was captain of a ship fighting the Spaniards.  He rose to be a rear admiral and in 1738 he was sent by Walpole with a squadron of ten ships to protect British commerce against the Spaniards.  He died at the age of sixty, and by that time he had attained the rank of Admiral of the Blue.  He represented Rochester in Parliament on two occasions.  Nicholas, like his father, has gone down in history as one of England’s most able and distinguished admirals.  He was buried with the rest of the family at Leigh.

The words to his son of Admiral Haddock as he lay dying are worth recalling, for they are said to have comforted Nelson during moments of disappointment.  He said:

“I have left you but a small fortune, but it is honestly got and will wear well; there are no seamen’s wages or provisions, nor a single penny of dirt money in it.”

Shortly after the time of Nicholas Haddock the male side of the family died out and so the successive generations of Haddocks at Leigh came to an end.  Altogether sixteen members of the family are buried in the churchyard at Leigh.  Such amazing traditions of naval eminence in one family have never been known before and are unlikely to occur again in the history of England.