The annual Whitebait festival is usually held in September.  It opens with the traditional morning ceremony of blessing the catch.  The mayor of Southend and other prominent citizens, together with officials of the chamber of trade, go out from the pier to the bawley to watch the fishermen haul in nets of whitebait.  A short service is held, lone of the local clergy pronouncing a blessing on the catch.  The whitebait is brought in to the pier, and taken to the banqueting hall, where it is prepared and cooked and served at the evening banquet. 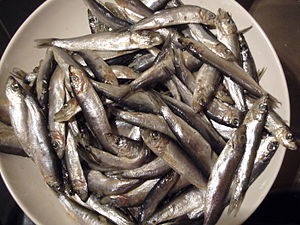 The whitebait spawning grounds are situated not far from Southend Pier and this is practically the only place at which this fish is caught, with the possible exception of small quantities at Morecambe Bay.

At one time the centre of the whitebait industry was Greenwich, as the pollution of the Thames there and at Blackwell produced the best whitebait in the world.  Later the water content changed and the infant whitebait died.  The teeming nurseries then went down to near Southend.

But it was in Essex that the industry was first established.  Early in the eighteenth century the commissioners for the protection of the low land from flooding held their first dinner at Dagenham.  Later that famous Shipp inn by the water at Greenwich was the scene of the festival.  the custom of the banquet fell into abeyance for some years but was revived and in 1894 Lord Rosebery was a guest.  The parties from London always went by water from the Palace of Westminster, until Essex won back the industry from Kent.

Whitebait is a delicacy that depends a great deal on the manner in which it is sorted and cooked.  Reporting on a Southend banquet in 1934, The Times said:  "Lilies that fester smell far worse than weeds; whitebait ill-cooked is much nastier than salt cod, and many are the people who do not like whitebait because they have never tasted whitebait worthily cooked and served."